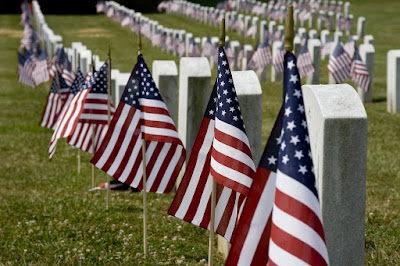 To honor those who died during the war, soldiers would decorate graves with flowers, flags and wreaths. Memorial Day became its official name in 1882, but the holiday wouldn’t legally become Memorial Day until 1967.

2. There is a National Moment of Remembrance law.

In December 2000, Congress passed a law requiring Americans to pause for one minute at 3:00 p.m. local time on Memorial Day to remember and honor the fallen. The time was chosen because 3:00 p.m. “is the time when most Americans are enjoying their freedoms on the national holiday.”

3. Waterloo, New York is considered the birthplace of Memorial Day.

Many other towns claim they are the birthplace of Memorial Day, including Boalsburg, PA, but Waterloo won congressional recognition. In 1966, Congress unanimously passed a resolution to officially recognize Waterloo as the birthplace of the holiday. Waterloo began holding an annual community service since May 5, 1866.

4. Confederate Memorial Day is still observed in some states.

Nine states officially set aside a day to honor those who died fighting for the Confederacy in the Civil War, in addition to the national holiday of Memorial Day. Those states are Texas, South Carolina, Alabama, Virginia, Louisiana, Mississippi, Tennessee and Georgia. The days varies, but only Virginia observes Confederate Memorial Day on the same day as Memorial Day.

On May 30, 1868, President Ulysses S. Grant directed the first Memorial Day Ceremony at Arlington National Cemetery. The principle speaker was Civil War general, Republican congressman and future President James Garfield. “If silence is ever golden,” Garfield stated, “it must be beside the graves of 15,000 men, whose lives were more significant than speech, and whose death was a poem the music of which can never be sung.”

Every year on Memorial Day Weekend over a million motorcyclists ride to Washington D.C. for Rolling Thunder, a bike run that honors those who served in the Vietnam War. It all began during Memorial Day Weekend in 1988 when 2,500 motorcyclist rode to the first Rolling Thunder rally to draw attention to the Vietnam War soldiers still missing in action or prisoners of war. This year’s event will start May 27 and end with the National Moment of Remembrance at 3:00 p.m. on May 30. For more information about the event, please visit their website at www.RollingThunderRun.com.

7. More than 38 million people will travel this Memorial Day.

AAA project more than 38 million Americans will travel this Memorial Day weekend, which is the second- highest Memorial Day travel volume on record and the most since 2005. Because of the low gas prices in more than a decade, about 700,000 more people will travel compared to last year.

Memorial Day is a time for travel, family and great food, but it is also a time to thank those who have served our country, and honor those who gave their lives defending our Freedom. Wicked Willies wants everyone to have a happy Memorial Day Weekend. If you are vacationing this weekend, we wish you safe travels!